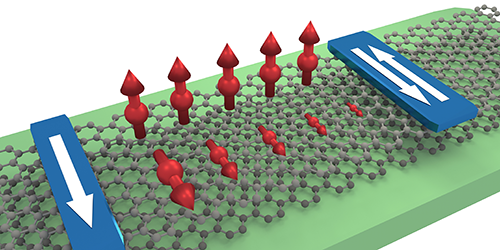 Graphene’s exceptional electrical conductance makes it a prime target for spintronics technologies, which exploit the spin of the electron for data storage and transfer. However, it’s hard to manipulate the spins of graphene’s electrons because of weak spin-orbit coupling—the coupling between an electron’s spin and its motion. Researchers have circumvented this problem by placing graphene layers on transition-metal dichalcogenide (TMD) materials with strong spin-orbit coupling. But in doing so, they compromise graphene’s electrical properties. Now two teams have shown that they can manipulate spin-orbit coupling in graphene bilayers so that the lifetimes of two perpendicularly polarized spin currents in the material are significantly different. These graphene bilayers could be used as the basis for spin polarizers, which transmit spins that are polarized in a preferential direction.